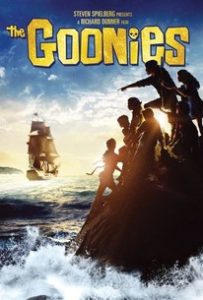 Leonard Maltin wasn’t alone when he noticed similarities between Goonies and the 1934 Our Gang comedy Mama’s Little Pirate. Adapted by Chris Columbus from a story by Steven Spielberg, the film follows a group of misfit kids (including such second-generation Hollywoodites as Josh Brolin and Sean Astin) as they search for buried treasure in a subterranean cavern. Here they cross the path of lady criminal Mama Fratelli (Anne Ramsey) and her outlaw brood. Fortunately, the kids manage to befriend Fratelli’s hideously deformed (but soft-hearted) son (John Matuszak), who comes to their rescue. The Spielberg influence is most pronounced in the film’s prologue and epilogue, when the viewer is advised that the film’s real villains are a group of “Evil Land Developers.” The musical score makes excellent use of Max Steiner’s main theme from The Adventures of Don Juan, not to mention contributions by the likes of Richard Marx and Cyndi Lauper. ~ Hal Erickson, Rovi